A grand total of 28 people gathered at the Parish Council Car Park at North Anston, where we were met by our leader Geoffrey Wilmore (Vice County Recorder for VC63) who provided a brief introduction to the day. Anston Stones Wood Local Nature Reserve and Site of Special Scientific Interest includes magnesium limestone grassland and scrub and is one of the best examples of limestone dominated woodland in South Yorkshire. An aim of the day was to search for and learn to identify the numerous plant species occurring at the site, particularly those which have very limited distribution in Vice County 63. 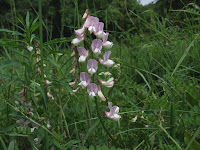 Luckily there was no sign of the rain that had been promised in the forecast as we  skirted around the cricket pitch to our first stop next to the single robust specimen of Hybrid Plum (Prunus x fruticans).  This is a hybrid between Blackthorn (Prunus spinosa) and Wild Plum (Prunus domestica) and there is only one other record in South Yorkshire. We then started our walk along the natural gorge adjacent to Anston Brook and stopped to admire the wood vetch (Vicia sylvatica) scrambling up through the tall grass and lesser stitchwort (Stellaria graminea) at the side of the footpath. This was a new plant to many and the beautiful pale flowers with purple veins were very distinctive and much admired.

The area around Little Stones proved an interesting place and it took the promise of Pale St John’s Wort (Hypericum montanum) to encourage our large group of keen botanists to venture further along the footpath to search for this nationally scarce plant and limestone specialist. A single specimen was located by Geoffrey in its usual location, although we were too early in the season to see the distinctive pale yellow flowers. However the plant proved a useful specimen to revisit the identification of vegetative Hypericum species, as well as to discuss the identification of Downy Oat-grass (Avenula pubescens) and Meadow  Oat-grass (Avenula pratensis) as both species were growing nearby.

We then followed the pathway into the woodland where we were able to find Mountain Melick (Melica nutans), Fingered Sedge (Carex digitata) and a single Wayfaring Tree (Viburnum lantana) growing next to the path. The small stand of  Fingered Sedge growing on a boulder was perhaps past its best, however several of the group lingered to inspect the crimson colour on the basal sheaths.

Emerging from the darkness of the wood we stopped to have lunch on an area of species-rich grassland managed by Yorkshire Wildlife Trust after admiring the Saw-wort (Serratula tinctoria) growing on the woodland edge.   Common Spotted Orchid (Dactylorhiza fuchsii) and the hybrid with Southern Marsh-orchid (D. x grandis) were growing in the meadow, and one or two dead heads of Southern Marsh-orchid itself (D. praetermissa) were seen.  After lunch we searched unsuccessfully for Fly Orchid (Ophrys insectifera), which also flowers earlier, however we were able to locate thousands of Pyramidal Orchid (Anacamptis pyramidalis), together with Yellow-wort (Blackstonia perfoliata).

Heading back into the woodland and dropping downhill to the river we located the Wood Barley (Hordelymus europaeus), a rare and local species in the county. The stop gave Geoffrey the opportunity to describe the woodland at Anston Stones Wood within the context of the National Vegetation Classification (NVC) and many jotted down some useful notes on the NVC W8 woodland community (with Dog’s Mercury beneath Ash and Sycamore) before we dodged the rain showers on our walk back up to the car park.

Many thanks to Geoffrey for leading and to Mel Linney for organising a very enjoyable and educational fieldtrip and for introducing us to some of the scarcer plants found in South Yorkshire.

Posted by South Yorkshire Botany Group at 00:13 No comments: 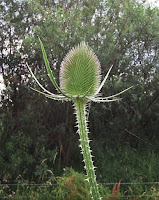 Posted by South Yorkshire Botany Group at 23:57 No comments: