The Wentworth Estate was subjected to open-cast mining from 1946, with mining continuing into fields and woodlands to the west of the house into the early 1950s; this included Kepple’s Field. Kepple’s Field then regenerated into a grassland, being very boggy in places. However, over recent years the scrub has been allowed to encroach into the field.

Scholes Coppice and the neighbouring Keppel's Field (which was once a part of the woodland) were designated a Local Nature Reserve by Rotherham Metropolitan Borough Council in 1996.

The purpose of the meeting was to record spring flora that had perhaps not been seen in previous surveys which have been carried out later in the season. Of particular interest would be re-finding the Star Sedge (Carex echinata), Brown Sedge (Carex disticha), and Bog Pimpernel (Anagallis tenella) to confirm their continued presence.

The walk began by following a footpath along the southern edge of the field before entering a wooded area which contained old Bell Pits. Due to the proximity of local houses whose gardens bordered the field, many taxa considered as garden escapees had to be discounted.


Also noted were Yellow Rattle (Rhinanthus Minor), Oxeye Daisy (Leucanthemum vulgare), Zigzag Clover (Trifolium medium), Soft Rush (Juncus effusus). It would be remarkable if this taxa was not recorded as it is one of the most widespread species. 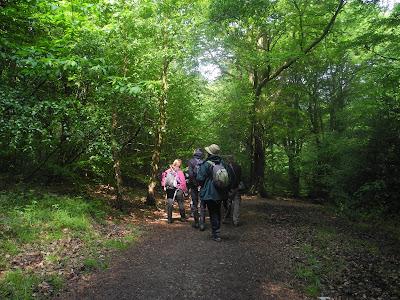 An Alder Beetle (Agelastica alni) was found on the leaf of an Alder tree (Alnus sp.).  Giant Fescue (Schedonurus gigantea), (note the auricles), Hairy Tare (Vicia hirsuta), Wood Meadow-grass (Poa nemoralis) typically showing leaf blade standing away from the stem at right angles. Remote Sedge (Carex remota), Creeping Soft-grass (Holcus mollis) with its hairy ‘knees’. Lesser Celandine (Ficaria verna ssp. verna) which has bulbils at the base of the leaf stalk, where it is usual for it to be found growing in the shade, and Wood Millet (Milium effusum).


A leaf from a Large-leaved Lime (Tilia platyphyllos) was examined noting that hairs were to be found on both side of the leaf. Sweet Vernal-grass (Anthoxanthum odoratum) was also noted in the woodland.

Leaving the woodland behind, the party now moved towards the mire where the wearing of wellies was recommended. Marsh Thistle (Cirsium palustre) was abundant here, as was the caterpillar of the Six Spot Burnet Moth (Zygarna filipendulae). An early flowering rush with a ridged stem and a bract under the flower head was located in the mire, with both Compact Rush (Juncus effusus) and Soft Rush (Juncus conglomeratus) being recorded. However, Hoary Ragwort (Senecio erucifolius) was still flowerless. An interesting Hawksbeard (Crepis sp.) was found in flower, but an ID has not yet been confirmed.


We now began finding various ferns; a Lady-fern (Athyrium filix-femina), Male-fern (Dryopteris filix-mas) and Narrow Buckler-fern (Dryopteris carthusiana), on which there were two galls (Chirosia betuleti) which had caused the tip of the frond to bunch up and stop growing.

One other fern puzzled us as there were two ferns growing from what appeared to be same rootstock. These turned out to be Broad Buckler-fern (Dryopteris dilatata) and a Golden-scaed Male-fern (Dryopteris affinis agg.). Finally, an Oval Sedge (Carex leporina) and the once abundant Common Cottongrass (Eriophorum angustifolium) were noted.


Posted by South Yorkshire Botany Group at 10:50 No comments: