Moss and liverwort meeting in the Porter Valley, Sheffield, Sorbyshire, May 14th 2016


Moss and liverwort meeting in the Porter Valley, Sheffield, Sorbyshire, May 14th 2016

Despite a slight confusion about the meeting point, this field meeting was a great success with nine of us plus a dog - appropriately named Moss! Overall, we had a good mixture of learning new identification skills and natural history recording throughout the day.

We first spent the morning in the Alder Carr, upstream of the Forge Dam, where the swampy conditions challenged many of us. There, we manage to see a series of mosses and liverworts, mainly epiphytes, typical of this habitat. We looked at the various characters that enable field identification of the common species encountered. 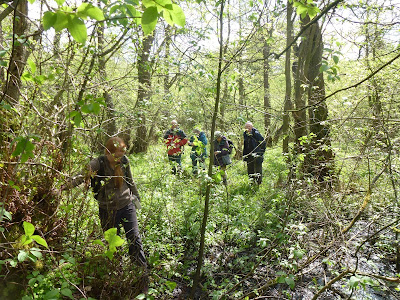 Much time was also spent around a few willow trees that had fallen down and that were literally covered with mosses. Although most of this epiphytic moss biomass was quite species-poor, the party was delighted to find next to each other, adjacent on the same branch, Ulota calvescens and Pylaisia polyantha. These two species appear very scarce when looking at distribution maps (have a look on the NBN gateway!) but they are known to be increasing across the UK. 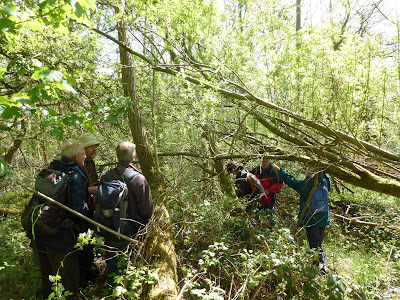 During the quick lunch break overlooking the pond, Joan described to the party how much this water body has changed. She recalls the time where it was possible to hire small rowing boats and spend some time on the water. Today there is a wooded island in the middle and most of the open water is extremely shallow.

After this stroll down memory lane, we walk up the valley towards Porter Clough and made frequent breaks to look at bryophytes. The waterfall was a highlight with several ‘nice’ species such as Hyocomium armoricum.

Our final stop was in the species-rich meadow just downstream of Porter Clough, where a path leads to the Mayfield brook. A small drain or gully turned out to be absolutely covered with Pleuridium subulatum, a minuscule moss species holding its capsules tightly between its long, narrow leaves. After a bit more search along the gully, it proved also hosting a healthy population of Fossombronia sp., a small liverwort looking just like miniature lettuce. 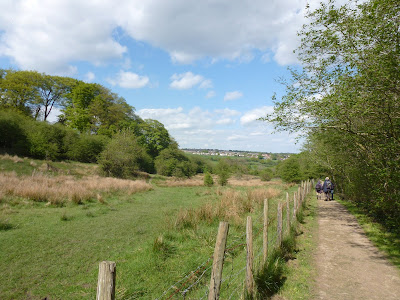 Many identifications are still pending microscopic examination, mainly because Ambroise lags behind with his specimens. However, without reservation we can already say that we made good progress towards recording all moss and liverwort life in the Porter Valley, with the discovery of several species new to the local area.

In short, a fab day greatly enhanced by exceptional sunny weather and good botanical company! Many thanks for those who made the effort to come and looking forward to the next moss meeting on Saturday October 29th 2016, visiting the Burbage plantation. We are anticipating another jolly bryophyte party.