As reported below by Kate, we had lovely day! Here is a short account of some of the bryological highlights of the day. I am looking for a way to put up on our blog the species list, let me know if you have an idea.


We first explored boulders and trees in a clear woodland part of the Longshaw Estate. Finding Tritomaria exsectiformis was very exciting because this liverwort is uncommon in the area. It was relatively abundant on boulders and bore conspicuous clusters of reddish-brown gemmae (little asexual propagules). 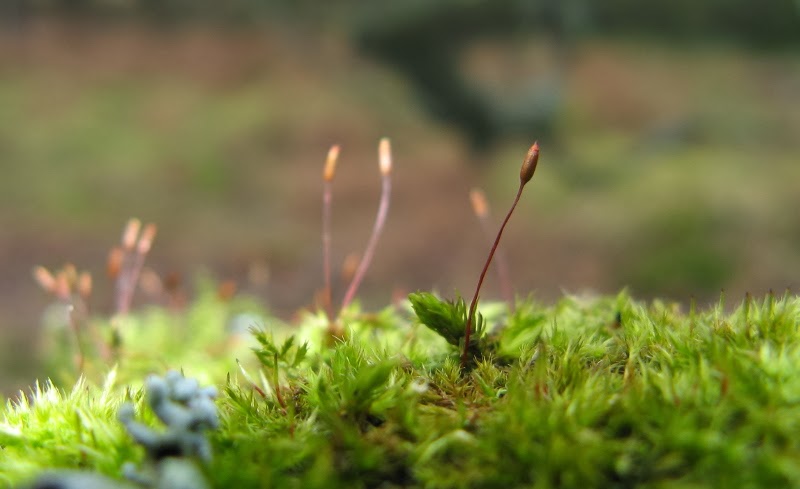 We recorded many epiphytes including a few unusual species such as Pylaisia polyantha. Tom demonstrated the field characters to look for with this species and Louise managed to photograph the diagnostic capsule lids of conical shape. Many thanks to Louise for sending her picture!

We also spend time looking at commoner species and we got particularly impressed by one patch of Brachythecium rutabulum literally covered with ripe capsules (organs of sexual reproduction). This and other findings led to sobering discussion on the complexity of bryophytes reproduction.

After a detour by a small boggy place with low abundance of Sphagnum, we had lunch sheltered in a conifer plantation where bryophytes appeared less diverse. After lunch we headed off towards the Burbage Brook.

There was a great variety of bryophytes by and in a small tumbling stream we encountered. Species observed include Fontinalis antipyretrica and Dichodontium pellucidum, for instance, and Tom also spotted the rarer Platyhypnidium lusitanicum and Trichostomum tenuirostre.

Three of us continued moss-hunting a bit further down the valley. We dived into a mire dominated by tall rushes and deep water, looking for Sphagnum. We initially struggled to find the common Sphagnum fallax but we were eventually rewarded and all in all found a very good six Sphagnum species plus one specimen pending refereed identification.

This was a very successful outing with 6 field botanist, 16 liverwort species and 67 mosses species recorded ;-)  Thanks a lot to Joan and Tom for sharing their knowledge and experience.